True to Northwest Coast potlatch style, on the evening before the show opened I was still busy putting the finishing touches onto a robe that had been on my loom for the better part of two years. The following day, “Sky Blanket: Recent Works by Meghann O’Brien” opened as a small show at The Bill Reid Gallery of Northwest Coast Art— the only institution in the world that exists solely to exhibit contemporary art of the Northwest Coast. While this may not sound like much, it was at one time not considered art, but rather anthropological artifacts. The space was founded after the passing of the influential Haida artist of the same name, whose work catapulted Northwest Coast art onto the world stage as equal to the great masters of other areas and eras.

The success of the gallery was led for many years by founder, scholar, and curator Dr. Martine Reid. Haida curator Kwiaawah Jones, K’saan Moody, and collaborations with the Haida nation have cemented the space’s role as a premier venue for the display of our art while retaining a strong focus on cultural values as well. This was the second focus exhibit I’ve had the honour of working with Martine on. The gallery has been profoundly influential for me as an artist. Martine’s most recent endeavour, Scriba International Art Society, sponsored the exhibit. This new charitable organization supports and promotes writers in the field of visual arts.

The evening of March 5th, 2014 for me was incredibly meaningful-not only in an artistic or professional sense but culturally as well. Chief Beau Dick, ‘Walas G̱wa̱ʼya̱m “Big Whale”, of the Musǥa̱’makw Dzawada̱’enux̱w “Four Tribes of Kingcome Inlet”, has been one of my earliest and most influential guides in this art form. His attendance and guidance through the evening meant more to me than I can express. His ex-wife Sherry Lightbown and their daughter Kerri were among my first teachers and remain close mentors. At the time I began weaving, Beau’s home in ʼYa̱lis (Alert Bay) was a vibrant work space with a constant influx of people coming and going, and always a few key people constant such as Wayne and Marcus Alfred, Shawn Karpes, and my uncle Aubrey Johnston. Family, friends, acquaintances, anthropologists, curators, gallery owners, tourists, beginning and master weavers and carvers, storytellers, singers, and medicine makers could at any time be encountered in his realm. Everyone was so alive in the space, creating our culture.

A few years into weaving, I moved up north for an apprenticeship with William White. And a lot of that world seemed distant to me, as my time in Prince Rupert has been spent almost entirely in isolation. Like it was meant to be, this is in accordance with old traditions where weavers once worked in seclusion. When Beau showed up that evening with Haida and Kwakwaka’wakw singers and ceremonial people, I received the added blessing of getting to share this celebration with some of the most important people in my life.

I was so happy to have my friends and family percent for this evening. I send out a huge thank you to Jay Simeon and Andy Everson, and Margaret, Nigel, and Andrew Grenier for their contributions to the design process. And to Kwiaawah Jones for her help with the face paint:) The face paint is traditional to the clan I belong to in Haida Gwaii, it is the vertical T of the Copper. Thank you to Martine Reid for her support and the donors who make the gallery work. To my parents and family for their support.

On that evening Beau performed a traditional Kwakwaka’wakw blessing ceremony with eagle down on my mother Dixie and sister Avis and I. His wisdom and genius open up what our culture is to both those within the culture and those who support it. He shed so much light onto what the weaving is for me and where it belongs. His teachings and example has instilled a strong sense of responsibility as to how the knowledge that has been shared with me can be rightly used.

I was also deeply honoured by the presence of  Allan Davidson Jr., Chief Skil Hiilans of the village of Yan in Haida Gwaii. He accepted the responsibility of owing T’lina, the first Raven’s Tail robe I wove. (Read about this event in the blog post The Art of Giving.) To have his presence and hear his words, and to witness the robe dance was incredibly emotional for me.

My younger sister Avis Nalaga “Bringer of Daylight”, sang a Haida song, and surprised me by gifting a beautifully designed paddle that displayed two of our Haida crests: Frog (our main crest), and Killer Whale. She has grown in her learning and accepted her talent, working closely with our cousin Jay Simeon in Haida design and carving, and I am so very proud of who she is and what she does.

I’m generally not very inclined to dance weavings I’ve completed, but rather take joy seeing others dance them. Part of the beauty of this is that our culture is so strong that there are singers and dancers to bring the weavings to life. But this robe was a bit different and I felt a strong connection to it. This weaving encompasses knowledge that came from all of my human teachers, as well as the non human teachers like cedar bark, mountain goat, and other aspects of nature. Their lessons have helped and changed me in many ways.

I also gave a short thank you speech that night…the first few words of my talk was introducing myself by the Kwakwala name I carry, but they were cut off.

It has taken a long time to begin writing about this piece of weaving, and yet it feels like words only can take away from it in some sense. As an event, so much occurred on that night, and leading up to it, I’m kind of scared of forgetting to mention some of it! My sincere desire to accurately share and honour all those who were a part of my process and that evening is a challenge for me. It used to feel as though my story was something very linear, very logical. There were specific events which led to other events, each easily understandable how one impacted the other. Sky Blanket is an expression of that linearity, but also of the complex and unseen ways that people, places, events, animals, plants, water, nature, human thought, and time can co-exist and simultaneously overlap to create a multi-dimensional web of story. Each thread once pulled, a word once spoken or voiced, delicately stretches at every other. I may never be able to explain what Sky Blanket means to me. Perhaps the robe itself has its own voice, which will be unique to every person, and my voice would only over run it’s. And when I really think about it, that was what I wanted. I wanted to be able to use the art form to talk about what it taught me, I wanted to share the beauty of an experience I had while working with mountain goats wool. I wanted that experience to have a place in this world, for other people to experience that moment with me, collectively. And in that, I hope I can share my transformation with them. 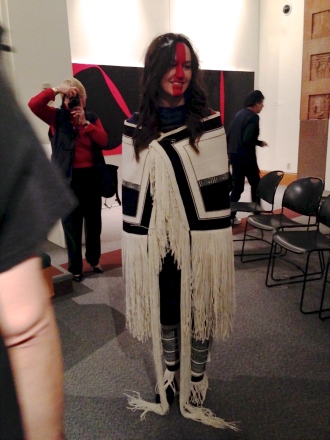 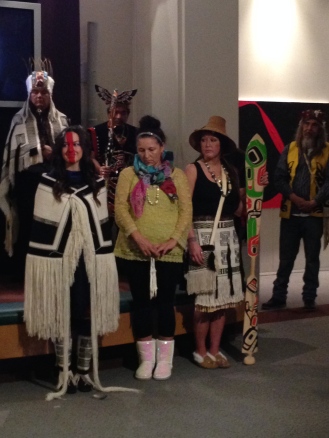 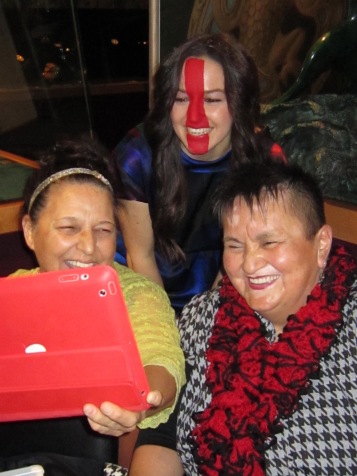 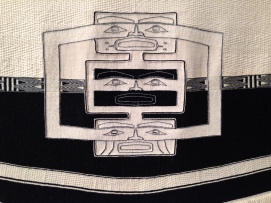 The following day, I was interviewed by CBC Radio One’s North by Northwest. This can be heard at:

A further blog post will explore the design process, meanings, and metaphors of certain designs in Sky Blanket. As it is too lengthy a topic to discuss here.

2 thoughts on “a Celebration”