The idea of clothing and textiles containing meaning and power has been held by every indigenous group around the world. As fast fashion and consumption of cheaply made garments continues to escalate, we find ourselves in a world where clothing has become more disposable. In fact the fashion and textile industry is now among the top polluting industries in the world. Indigenous worldview and values have the potential to bring back the idea of clothing having meaning and power. Equally, the fashion world has the potential to give renewed relevance for our worldview in a contemporary context, without having to alter the techniques and materials. To me this is an amazing merging of two seemingly distant worlds, each with the potential to recontextualize, transform and inform the other.

The term “Ancient Couture” has been used by Dene artist/designer Sage Paul, and I love this. When we look back into the achieves of culture, there are so many examples of how western dress influenced northwest coast culture. Our Haida and Tlingit ancestors acquired captains clothing through trade and it was seen to denote high rank in a culture that prized the rare and the exotic also. More specifically of interest to me is how Naaxiin robes were often ceremonially cut and fashioned into new pieces of regalia such as leggings or aprons. When I see this tradition extend to western-style clothing as well, it makes me think that any question I have about wether or not it is right to turn ceremonial regalia into everyday clothing is entirely valid and alright! It’s clear to me that our ancestors would approve of this juncture between ceremonial regalia and everyday clothing. 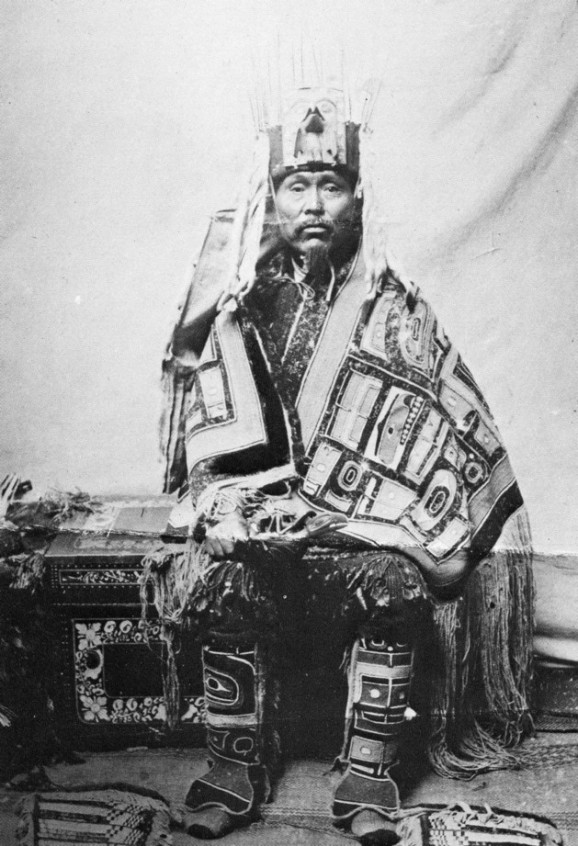 Chief Son-I-Hat (Kóyongxung) of the Yáadaas clan (Eagle moiety), was born in 1829, and was considered one of the wealthiest of the Haida chiefs. Although Son-I-Hat is a Tlingit name meaning “well respected,” both the Chief and his wife were of Haida descent. The Son-I-Hat family lived in New Kasaan. 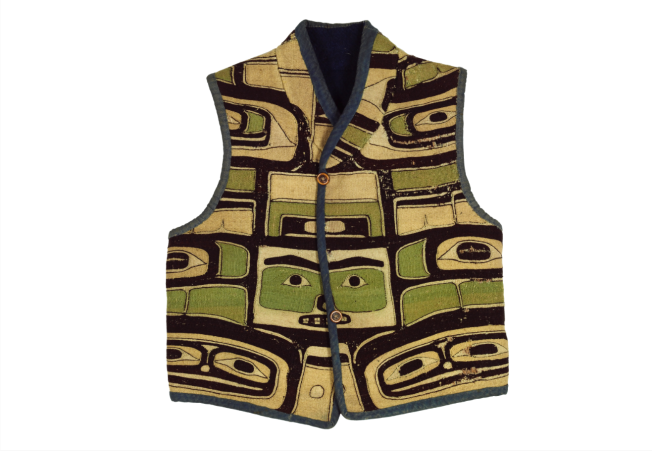 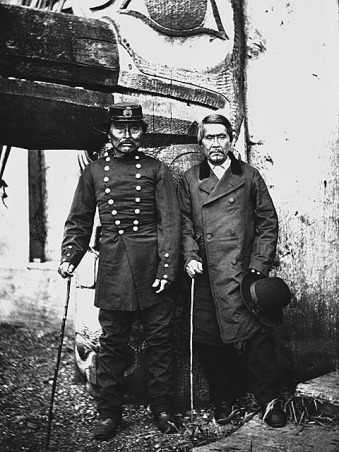 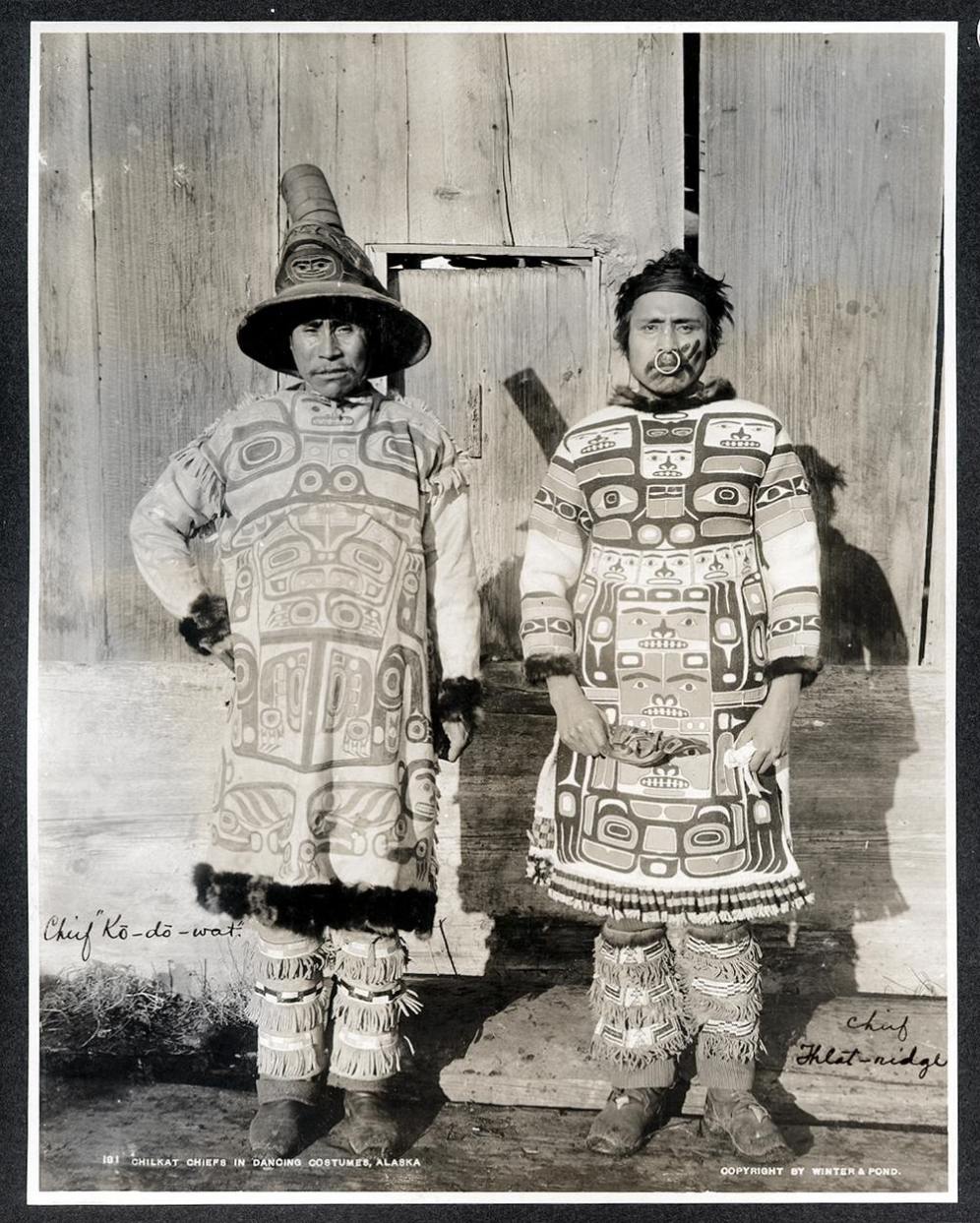 Despite the overarching trend of fast fashion, there is still small facet of this world where clothing is still hand loomed, hand sewn, hand beaded, and embroidered. That world is haute couture. In my mind, I place the garments made in that strict French tradition in the same place as the clothing made by indigenous people. In France, the term haute couture is protected by law and is defined by the Chambre de commerce et d’industrie de Paris based in Paris. The chambre syndicale de la haute couture is defined as “the regulating commission that determines which fashion houses are eligible to be true haute couture houses”. To me this is mirrored by the attempts of the Haida Nation to account for and validate those “real Haida” artists, or programs in Alaska such as the “Silver Hand”, aimed at ensuring that native art is indeed produced by true native artists.

The seed was planted between the world of haute couture, and my work as a recently trained Naaxiin (Chilkat) weaver while I was on a trip to Paris in 2012, where I met native Parisian weaver Maite Tanguy. She spent her days immersed in a workspace of her own apartment,  and what she wove was transformed into garments for the major couture houses of France: Chanel, Dior, and Christian Lacroix. Although she didn’t speak English, we shared a connection that only weavers would understand, and I knew she was a woman with vision and knowledge, and that her work was of value. 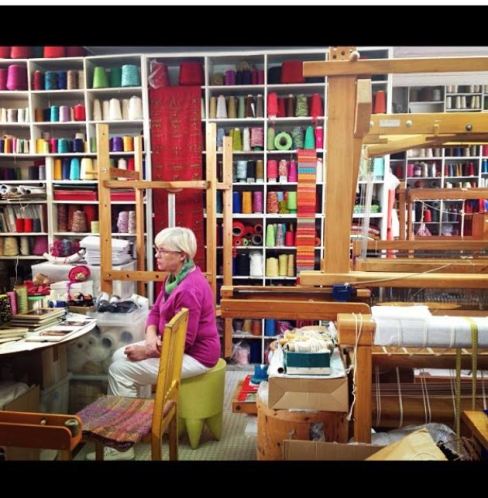 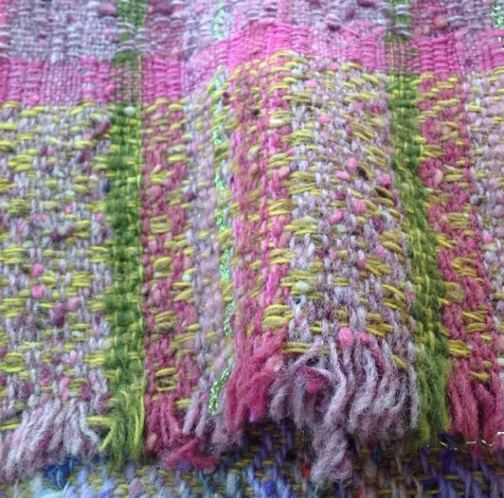 This world of haute couture is something of such extraordinary quality that it deserves to be held up as the high art form it is.  A lot of the time when we see things on a runway, the context of how they are made disappears, and as viewers we don’t understand why the prices are as high as they can be. So often fashion is seen as frivolous and unnecessary. Meeting the people who create this work and are paid a respectable living wage, I could more easily see why the prices are justified, and why some view this clothing as wearable art. This is a place where the quality of handmade textiles, beadwork, embroidery, and sewing is still held to a high standard and appreciated. I wonder sometimes if we are losing this as indigenous people increasingly looking for our piece of the pie, participating in industrial activity, making shopping malls and gas stations, and fast fashion. Are we being encouraged into the 21st century, into a world of contemporary art where conceptual and the abstract is beginning to reign. Has this modern world squashed all vision of what our societies and the world could be?

For as beautiful as all of the haute couture work is, for all of its honouring of the handmade, I don’t see the kind of meaning layered onto their work as I do when I look at the work of our ancestors all over this continent. The kind of quality of the handmade, paired with the meaning that each design and symbol and material and technique carries, is a coupling of such overwhelming beauty and meaning that it leaves me completely without words as to even get close to how special what we have had is, and want to work so hard to find our weaving the respect it deserves, rather than see it increasingly being relegated to the past. 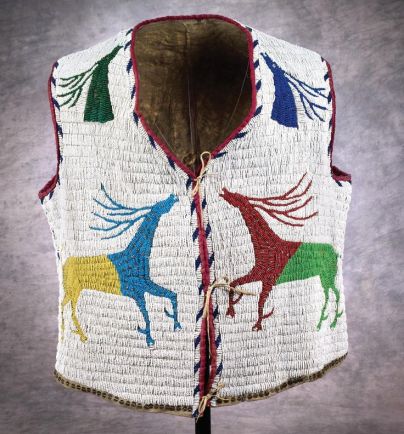 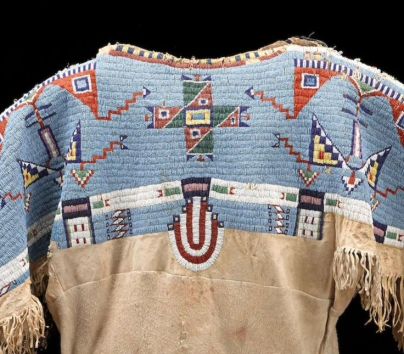 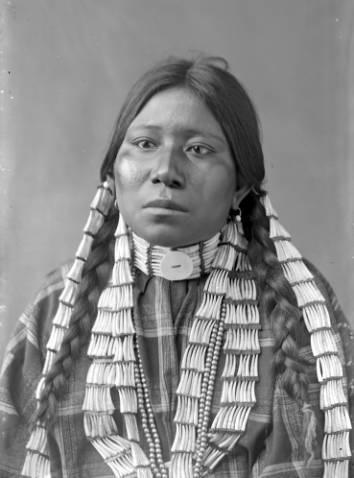 There have been some problematic issues around cultural appropriation of indigenous artworks, most notably the cases with Paul Smith, Urban Outfitters, Adidas, and DSquared. While I totally don’t agree with the way these companies chose to take from our cultures and slap some sacred designs on things, I also just generally don’t agree with this very much. It makes me sad to see Indigenous people in the realm of fashion quickly becoming submerged into that fast fashion world. Oftentimes contemporary brands I see emerging that are indigenous run are so similar looking to those brands who are exploiting and appropriating our culture. My question is, if it’s not okay for them to do it, why would it be okay for us? If the end result is the same, how is this any better just because we make some money off it. The question of ‘who profits from what’ questions, raised again and again both in the context of cultural appropriation and in the realm of environmentalism and extractive resources, to me is irrelevant. The earth and health of our communities seems like it needs to come first. I simply don’t agree that just because a native community benefits financially, that the act itself is positive if the end result is the same.

There have been some promising ways that indigenous fashion has become a part of the world today, though. Some great examples are the work of Valentino, which reached out to artist Christi Belcourt regarding permission to use her exquisite artwork to create a haute couture dress. This is stunning!

The work of Jamie Okuma, a Luiseño/Shoshone-Bannock artist and designer, is an incredibly inspiring example of this merging of tradition with the contemporary. 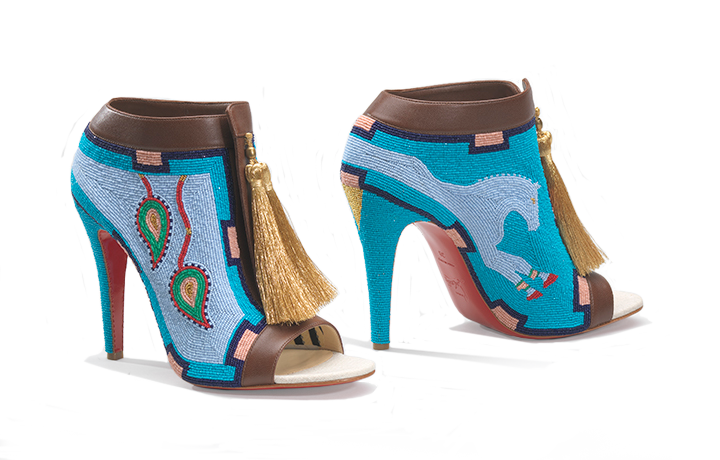 One of the earliest examples of the merging of European and Indigenous techniques is found in the work of Haida artist Bill Reid. He was the first Northwest Coast artist to employ the European goldsmith techniques of reposse and chasing to depict traditional crest designs. His work took jewelry of the Northwest Coast to an entirely new and exciting place that artists today still build upon, and the greater public enjoys wearing. 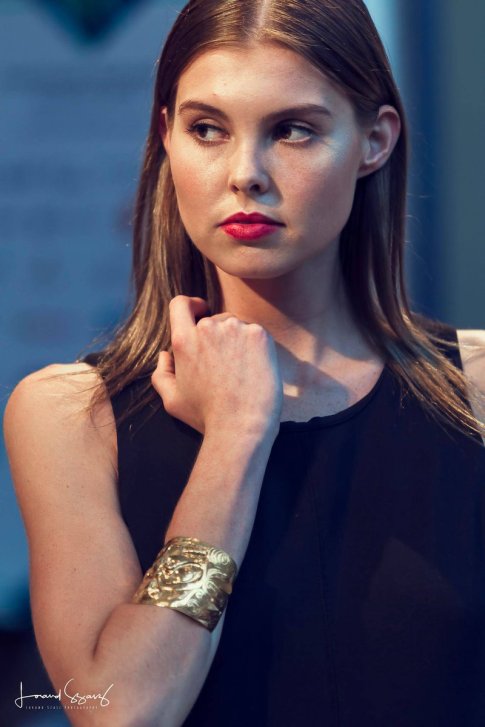 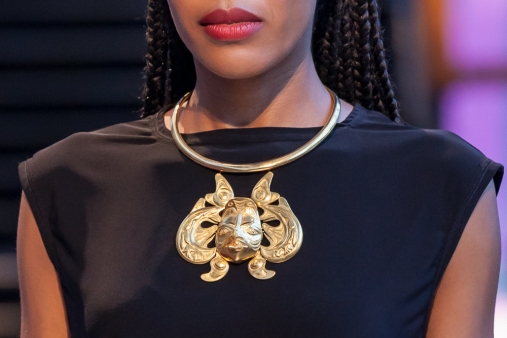 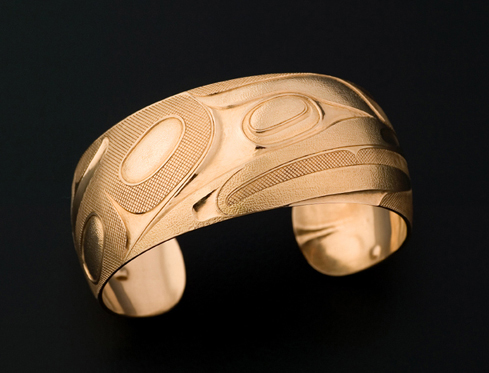 As an artist I wish to create work that is able to be worn in a way that gives reference and reverence to the materials and techniques of my ancestors, yet allows it to transform into a contemporary form for the everyday, one that reconnects our ancestral past to the communal present, the global present, where all cultures and worlds are converging and colliding. I have always been so drawn to weaving as a functional art, and the world of fashion is one that participates in the world today, not caught behind glass cases and separate from our everyday lives. The merging of two cultures and finding balance isn’t always an easy process to navigate, but with an anchor in our history, a good heart and good intentions in the present, I see no reason why Naaxiin cannot retain it’s role as one of the ultimate of status symbols within Northwest Coast society, and become known as one in the broader world as well. The wealthiest of any era, whether from within Northwest Coast societies or not, have always been the only ones who could afford to own Naaxiin. I envision Naaxiin as a new status symbol, one where those who wear it are socially, ethically, environmentally, and morally switched on. People of a high intellect and sensibility. People who know that true art isn’t bound by gender, genres, materials, or form. 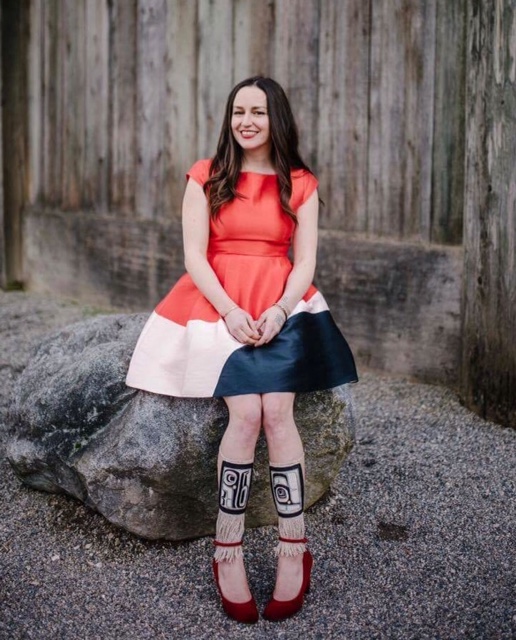