A few years ago back in ‘Yalis (Alert Bay), I met two Swiss ladies from Zurich’s North American Native Museum: Denise Danzier and Runa Loeb. Over the years we stayed in touch, and eventually our desire to collaborate resulted in a residency at their partner institution, The Museum Reitberg. It houses a collection of art from global cultures, yet has never classified them as anthropolgical artifacts since opening their doors in 1952. I appreciate the space that has been created and the respect given to non-European cultures, and the worldview that is presented. In fact it is the only museum in Europe devoted entirely to non-European art. Peter Fux, Curator of the Americas, invited me for a short residency during the exhibition “Kosmos: Rätsel der Menschheit” or “The Cosmos: An Enduring Mystery”, December 12, 2014-May 31, 2015.

Exhibition catalogue (hardcover). Available for purchase on their website.

“The great timekeepers of our earthly existence are the celestial bodies surrounding us, especially the moon and sun. Humans have been trying to explain them and decipher them for thousands of years. What is the universe, the ordering principle underlying the firmament?

People throughout history have sought to answer this question starting from different premises and taking different approaches. This exhibition explores the great enigma that is the universe. Alongside cosmologies and creation myths from Africa, Asia, the Americas, and Polynesia, those of the western world from Egypt and Mesopotamia to the Germanic peoples and the biblical account in Genesis will also be presented, as will the history of European scientific inquiry. While the exhibition cannot answer the question of what the universe actually is, it does provide a fascinating picture of just how different interpretations of its fundamentals can be.”-Excerpted from the Museum Reitberg website.

There were some gorgeous contemporary video installations and a myriad of origin stories presented with the art inspired by them. A digital film produced by the American Museum of Natural History was also shown in the 10,000 square foot temporary exhibit hall.

The origin story relating to the Northwest Coast which was featured in Kosmos was that of Raven stealing the light from the bentwood box. The first robe I created, T’lina, depicts this story and would have been perfect for this exhibit but of course it was finished. Peter hoped I would be able to begin another full size Raven’s Tail robe for this residency, without realizing what a time commitment on my part. He welcomed me to work on another project. He also welcomed me to bring along Sky Blanket to be displayed during the residency.

My path as a weaver has led me to some new concepts to explore as a commercial artist. Naaxiin weaving is powerful and is traditionally meant to be worn in ceremony. I’ve been inspired by the relationship that is said to exist between the bentwood box designs and the robes. Looking back into our recorded history in the form of the art, the designs come from a time when our society was still highly ordered. The painted designs I chose were not intended to be woven, and are therefore very challenging for a weaver to achieve. The design I chose is a mouse woman design from a Haida bentwood box corner.

During the demonstrations I worked on one of the most technically difficult sections of the piece, which proved very challenging. I find Naaxiin weaving to be a pretty intense practice and very intellectually demanding. By way of explaining the work to visitors, I was able to make a breakthrough in my own understanding of the techniques.

Early on in my stay a newspaper article came out about me, and people were specifically coming in to visit and learn throughout my visit. It was like being in a parallel universe, where people were seriously so excited, interested and fascinated by the weaving. It was really cool. A link to the newspaper article can be found here, and the English translation is also available below.

I presented a one hour artists talk, which can be heard in two sections on the links here and here too.

The City of Zurich

My time at the Reitberg was spent working mostly at the museum, and much of the exploring I did was at night. I loved the feeling of being in a highly ordered society in general. It’s probably due to the level of disorganization in my personal life that I enjoy being in a place where there is a high degree of structure. I also really loved the sound of the Swiss German accent in this area. Of course Alex and I spent a night out to have Fondu, and he found some locally made and insanely expensive chocolate for us to indulge in. I also came across a beautiful boutique which specialized in haute couture. The exquisite made to order garments were created of fabric leftover from brands like Chanel. A couple of years ago in Paris, I met the lady who likely was the weaver of these fabrics! They are true artisans.

Oh the glamour of Zurich at night in winter. 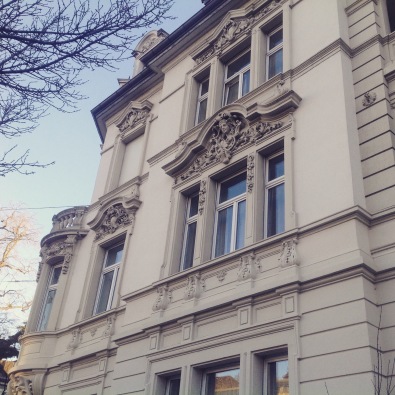 Home for the stay. It was right near the museum which was wonderful. 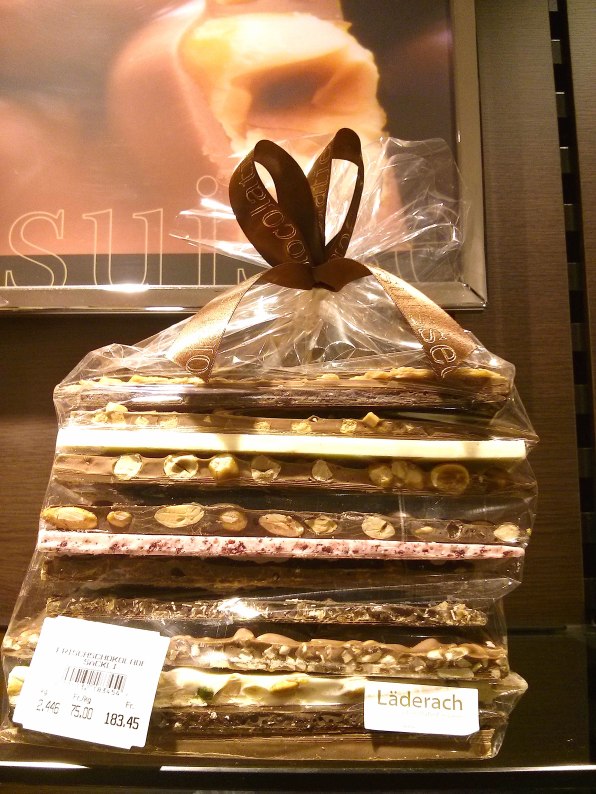 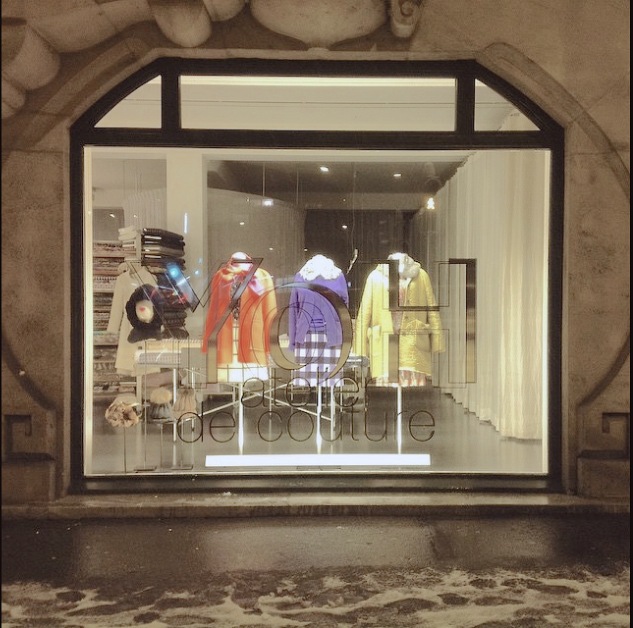 Just down the street, Yoh atilerie. 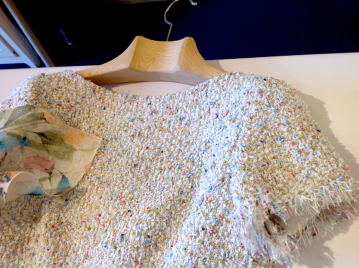 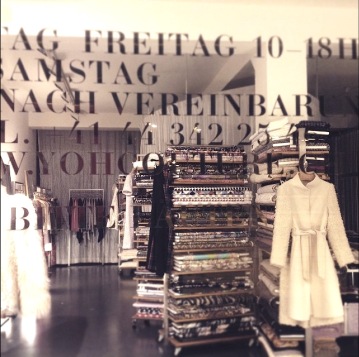 This shop was so pretty!

I wish I owned this beautiful coat, so pretty. 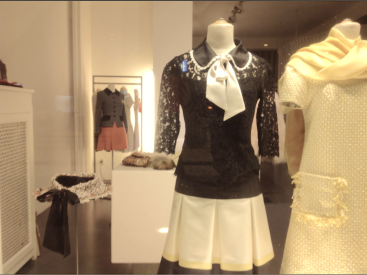 Beautiful clothing. At one time in human history it used to matter what you put on your body. 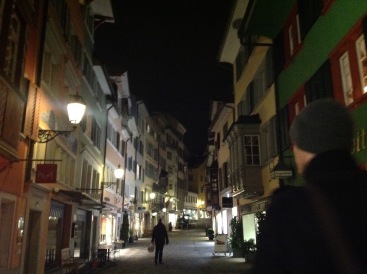 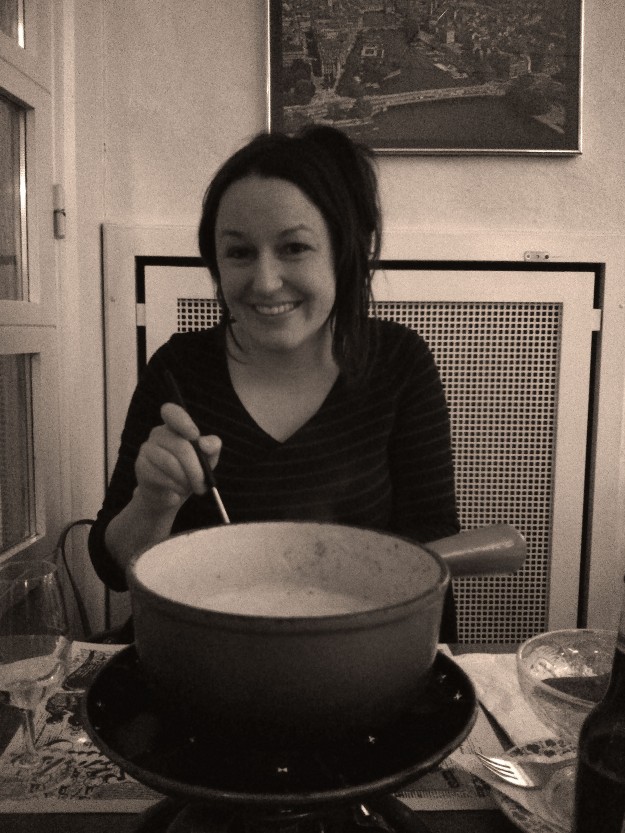 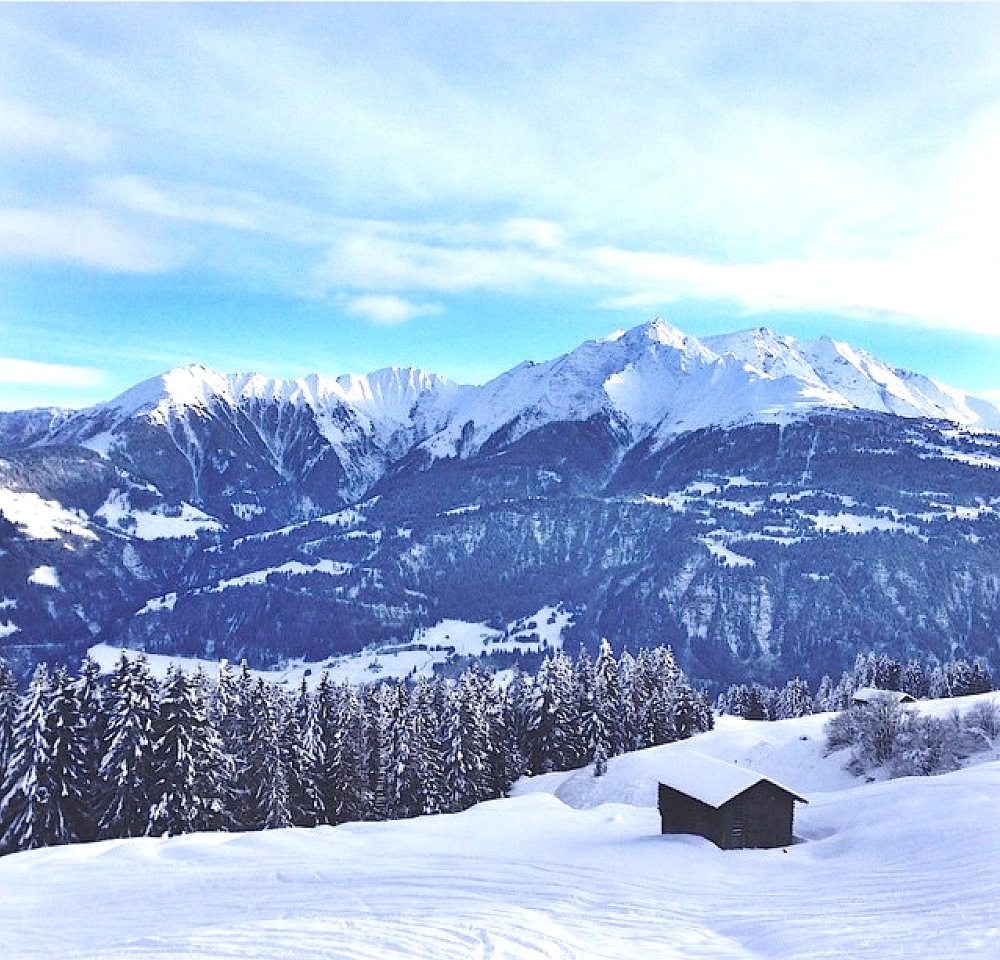 When I first began travelling as a weaver, I asked some of the senior weavers how they solved the problem of travelling with a robe sized loom. To my dismay, every one of them said “ski bag”. As I used to be a pro snowboarder, I was so unbelievably happy to be able to travel without my snowboard bag. But here I am, stuck with it again. So, I obviously ended up taking my snowboard as well on this trip. As it turns out, my friend Kevin who used to live in Whistler, had married and relocated to Zurich, so I had a chance to go up a few days on the weekend. At the end of my stay, my boyfriend Alex and I went up to Laax to visit my sister Spencer O’Brien during her qualifying for the Burton European Open. It was Alex’s first time snowboarding, and I enjoyed teaching him and watching him learn and enjoy the powder.

My sister Spencer is an amazing snowboarder and it was really fun to snowboard with her and all the others in perfect conditions. I caught up with old friends and enjoyed a few of the best day of snowboarding that year, with beautiful powder. 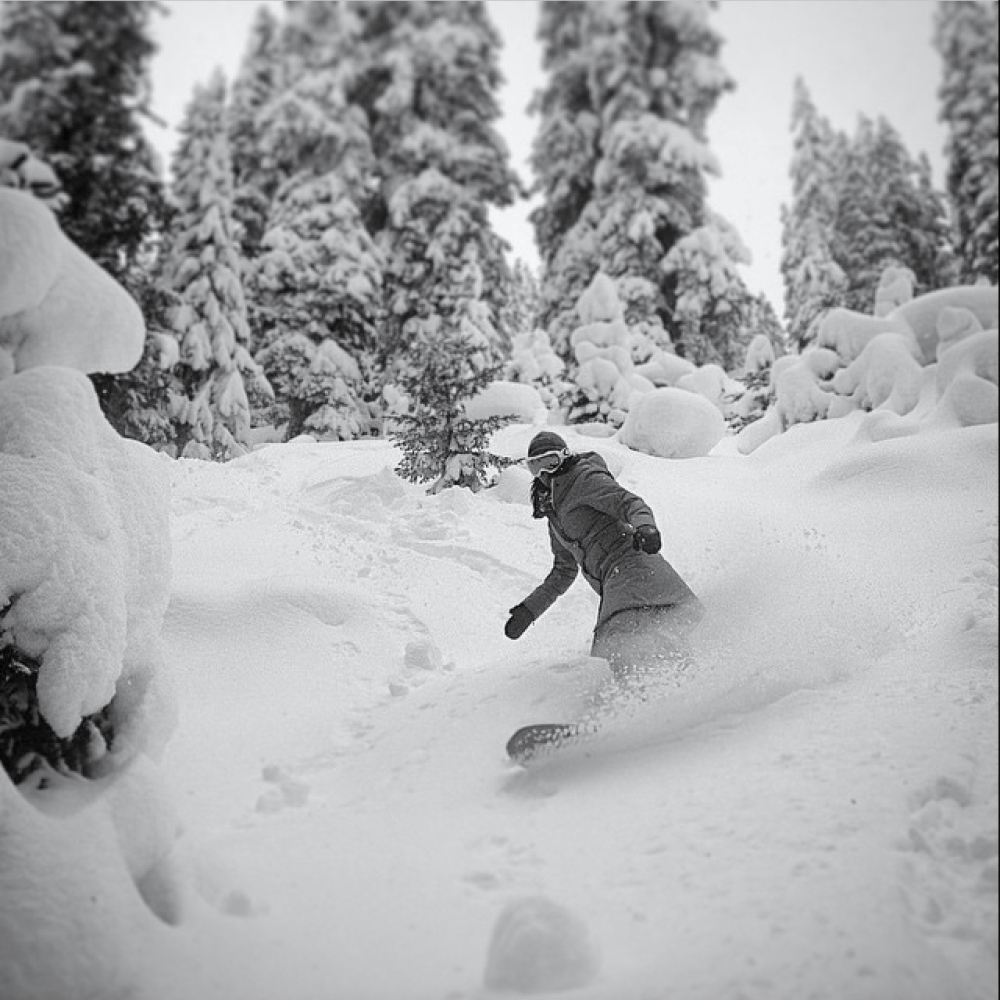 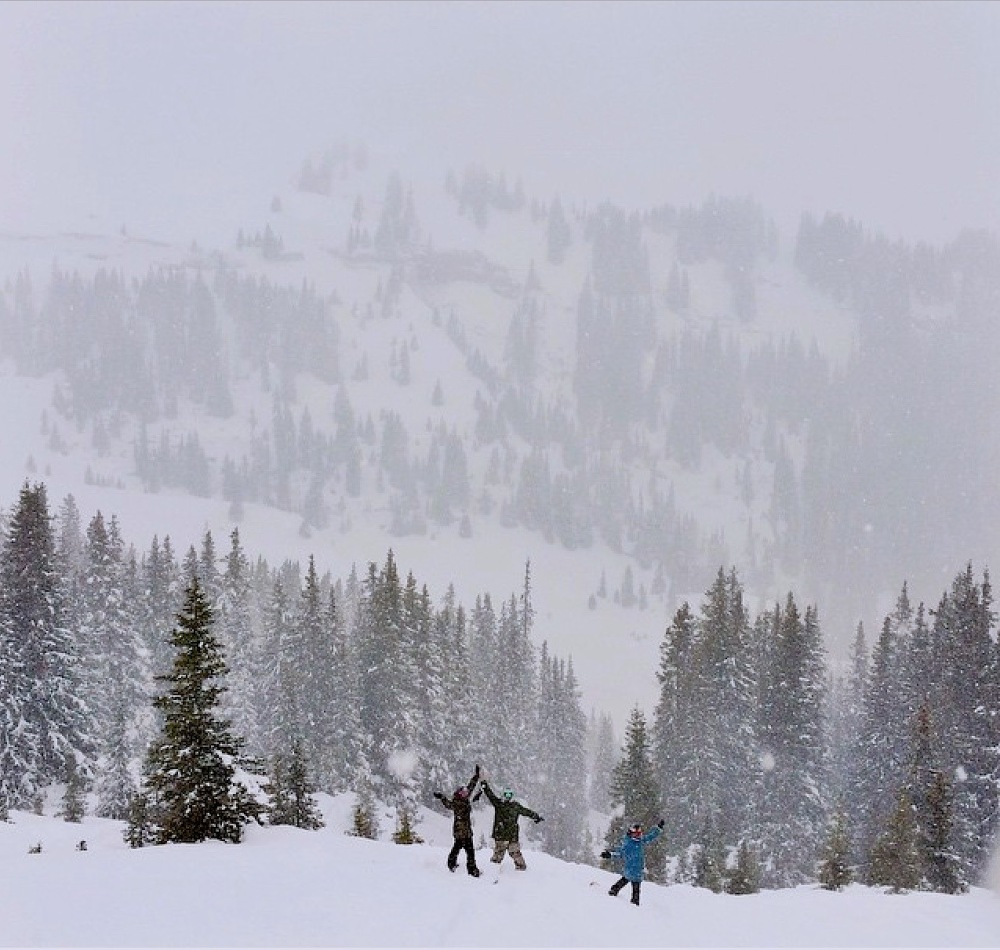 I completed Kuugan Jaad I, “Mouse Woman”, shortly after arriving back in Canada. I stay with my friends Joyce and Gary at their condo while I’m in town lately, and enjoy working in the space. This will be the first of three pieces derived from the same bentwood box, all mouse woman designs. I’m excited and look forward to seeing the rest as they manifest.